Buntisland Shadow Font Family
OTF TTF
Buntisland (we wonder where we came up with that name from... another subconscious whim), is Greater Albion Typefounders blackletter release for Christmas 2016. The family consists of four typefaces- regular, weathered, shaded and shadowed, and has it's origin in a design challenge which came up in conversation, as all the best ones do. In this case it was 'design a legible all capitals black letter...
Fonts
Read more

Cheesegum Font
TTF
Cheesegum is super legible even at very small sizes. If you use Cheesegum at larger sizes, you can see the delightful crucnhy edges! Kinda like roasted cheese! The crunchier, the lovelier! :)
Just go ahead and eat some Cheesegum!!!
Fonts
Read more 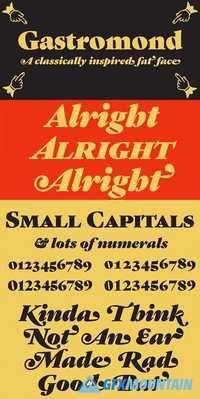 Gastromond Font Family
2 TTF
Gastromond began about five years ago with a question: why are fat faces always based on Didot or Bodoni models? Was there a reason that the stresses of these display faces was always vertical or horizontal and never angled? It was time to find out.
Gastromond is meant to blend the Renaissance stylings of the Garamond types with the Victorian outlandishness of the fat faces. The result is an emphatic take on a classic genre. Loaded with swashes and alternates, Gastromond has enough character to go around.
Fonts
Read more

AT Archistency
TTF
AT Archistency is a piano-key, stencil, serif face. Designed only with basic geometric shapes, it’s still legible and elegant. Can be used as any stencil-army typeface.
Fonts
Read more

6 Watercolour Logos 669553
14 TTF 13 OTF PSD | 19 MB
6 beautiful watercolour designer logos perfect for branding your business!
Whether you're a start-up, established business or blogger, these logo's are a quick and easy way to immediately add shine to your brand.
The file includes 1 psd with 6 folders each containing layers to edit text and graphics. Play around with the colours or positioning too! Font's included.
Fonts
Read more

Kidlit: a fun serif font!
OTF TTF
Kidlit is a serif font with just enough wiggle and squiggle to its lines to let its hand-drawn character shine.
This font contains not one ... not two ... but THREE complete alphabets, so you can mix and match letters to your heart's content. Stick with the straightforward regular letters, or kick your project up a notch with some extra-tall, extra-short, or extra-swirly alternates.
Kidlit also contains over 200 accented characters for foreign language support (including English, French, Spanish, German, Polish, Romanian, Portuguese, Swedish, Finnish, Norwegian, Danish, Esperanto, Czech, Dutch, Welsh, Filipino, Turkish, and more!)
Fonts
Read more

Multipurpose Portfolio Vo.II 936139
This Multipurpose Landscape Portfolio Vol.II, it is a professional and clean InDesign Portfolio template that can be used for any purpose. This item consist of 30 pages that fully editable and customizable. The design has a great selection of high quality page layouts, giving you a document you can use straight away, without having to design further pages.
InDesign Templates
Read more